History shows that Canadian train trips weren’t always so easy or so luxurious. In fact, without the Canadian railway, our home and native land might not exist at all.

Today – as big a country as Canada is (the world’s second-largest, after Russia) – it seems entirely navigable. Most major destinations are a few hours away by plane. But go back 200 years in Canadian history, and the country was nothing more than an unstitched quilt of lakes, bogs, forests, and rivers in the east; an endless mirage of prairie in the middle; and a maze of insurmountable mountain ranges and plunging river valleys in the west.

How did Canada’s rail get built?

It’s no understatement to say that the Canadian railway changed history, generations before air travel was commonplace. The train was a way to move people, yes – and Canada’s abundant natural resources, most definitely. But it was also an exercise in nation-building. Many provinces in the Atlantic and Western provinces agreed to join Confederation only on the condition that a rail link be built to connect Upper and Lower Canada (Ontario and Quebec, respectively). The event marked Canada’s official independence from Mother Britain. Literally, Canada would not be a country but for its railway.

And of course, in recent decades, rail has also been a boon to Canada’s tourism industry – offering new places to go, and a means to get there. As tales of mighty Niagara Falls and beautiful Banff spread, a newly affluent middle class became interested in leisure travel.

Read on to find out more about six of the lines that shaped Canada, connecting its disparate people and cultures, and introducing the Great White North to the world.

“If we can’t export the scenery, then we’ll have to import the tourists.”

When and where was the first Canadian railway built?

HOW IT HAPPENED: Financed by Montreal brewer and entrepreneur John Molson, the standard gauge track ran 26 kms (16 miles) between Saint-Jean-sur-Richelieu and La Prairie, Quebec (just across the St. Lawrence River from Montreal). Montreal was Canada’s biggest city and an economic powerhouse back then, and the new line promised an easier connection between Montreal and New York City – with U.S.-bound passengers connecting via steamer over Lake Champlain and down the Hudson River.

WHY IT MATTERS: The C&SL, in addition to being the first public railroad, also featured British North America’s first locomotive. It sparked an economic boom in the region, thanks to the railway’s ability to move goods and people quickly and efficiently. But more significantly, it sparked people’s interest in travel – with extra passenger trains added to the line, some hauled by horses until more locomotives could be brought online in 1837. Among the notable early passengers? Mr. Charles Dickens.

Can you take the train from Toronto to Montreal?

THE RAIL LINK: Indeed you can. Travel between Canada’s two largest cities became a reality in 1852, with the opening of The Grand Trunk Railway (GTR), connecting Montreal and Toronto. In fact, a short time later, Canada was home to the biggest railway network in the world.

HOW IT HAPPENED: The GTR was formally incorporated with the idea of connecting the British colony’s two biggest cities, but within a year, that vision had expanded – to Portland, Maine, in the east, and to Sarnia, Ontario, in the west. The Sarnia-to-Montreal stretch was completed in 1856, and by 1867 – the year of Canada’s Confederation – the Grand Trunk Railway was the largest railroad system in the world.

WHY IT MATTERS: Though the trip then took 14 hours (today it takes six), the GTR provided a critical lifeline from the Maritime provinces to central Canada. In fact, it was the connection to the Maritimes and its opening up of another trade route (beyond the popular St. Lawrence Seaway) that convinced provinces such as Nova Scotia, New Brunswick and Prince Edward Island to join the fledgling country. Along the way, a few impressive engineering feats facilitated the Grand Trunk Railway’s expansion, including:

Was the Pullman the first train sleeper car?

THE RAIL LINK: As it turns out, no. The Canadian engineers and designers beat the American’s to the punch. The Buffalo and Lake Huron Railway (B&LHR) debuted Canada’s first sleeper car in 1859.

HOW IT HAPPENED: While the B&LHR would ultimately be purchased by GTR in 1870, during its short life it developed a reputation for opulent style, with cushy berths that folded down from the ceiling. The railway installed Canada’s first couchette – a state car built in anticipation of the 1860 royal visit of Albert Edward, the Prince of Wales (Queen Victoria’s eldest son and the future King Edward VII).

WHY IT MATTERS: Canada’s first sleeper car inspired George Pullman to obtain a U.S. patent for the Pullman sleeping car, which by the late 19th century had become the industry standard. At its peak in the 1920s, Pullman sleeper cars were hosting 26 million people a year, and while sleepers have since become more of a niche mode of travel, the appeal of a luxurious overnight train trip – fit for royalty – endures.

When (and why) did BC become a province of Canada?

THE RAIL LINK: Well, they had one tiny little condition: getting the Canadian government to build a railway line all the way through the Rocky Mountains to reach British Columbia. On November 7, 1885, the Last Spike for the much-belaboured, much-delayed transcontinental railway – the Canadian Pacific Railway (CPR) – was driven into the ground in Craigellachie, British Columbia.

HOW IT HAPPENED: While the GTR was critical to getting the Maritimes on board with Confederation, the completion of the CPR was a make-or-break condition for Canada’s westernmost province to join, in 1871. But laying the track was no mean feat – taking 14 years and costing CPR’s owners dearly (the figures are unreliable) to build roughly 3,200 kms (2,000 miles) of rails. And the railway’s completion came at a steep human price: approximately 600 of the estimated 17,000 Chinese laborers who helped build the track died from the perilous work boring tunnels into mountains, wrapping rail precariously around cliff sides, and building elaborate wooden trestles to span heaving gorges. 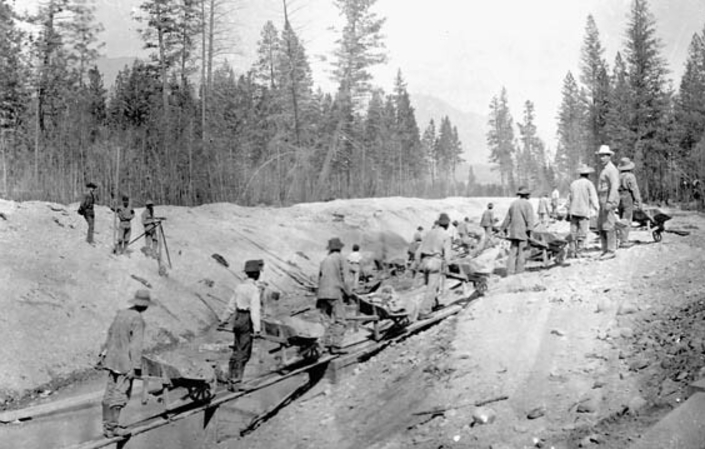 WHY IT MATTERS: A sea-to-sea railroad connected a disparate country and made settling its western reaches possible. The day after the Last Spike was driven, the first railway train to travel from the east (St. Lawrence Seaway) arrived in Port Moody, B.C., on Vancouver’s outer borders. It would be another 19 years before Russia completed its own transcontinental nation-builder, the Trans-Siberian Railway.

How do you get to the Chateau Lake Louise?

THE RAIL LINK: Back then, it was a straight shot on the train from the Canadian East. As the old saying goes, if you build it, they will come. (The ‘they’ being tourists, in this case.) To help pay for its expensive railroad, CPR, in 1886, began constructing a network of grand hotels and chalets across the country to build a domestic (and ultimately, international) tourism market.

HOW IT HAPPENED: Canadian Pacific hotels were usually near train stations and provided easy overnight accommodation for travellers crossing the country. While some of the earliest CP hotels were initially just dining stops – required because the railway grade made it impossible to haul a dining car – in time, the facilities became more luxurious. Some of the most famous locations – such as the Banff Springs Hotel and Chateau Lake Louise – were located in the Rockies, or what CPR marketers called the “Canadian Alps” to lure American and European tourists unfamiliar with Canada’s wild beauty. (CP even hired professional mountaineering guides from Switzerland to work at the hotels and lead tourists safely into the wilderness.)

WHY IT MATTERS: Were it not for the massive debt CPR had to repay, there would have been no urgency to build these hotels – and ultimately, open up the west to tourists. Canadian Pacific Railway management was also behind the successful lobbying effort that led to the creation of Banff National Park, in 1885. It was the first national park and, as we at Fresh Tracks can attest, one of Canada’s top tourist attractions.

VIA Rail’s The Canadian: From Toronto to Vancouver in impeccable style

THE RAIL LINK: Taking the idea of a “room with a view” to the next level, Canadian Pacific Railway debuted a new domed passenger train, The Canadian, in 1955. It was an age of optimism, and The Canadian was the pinnacle of both novelty and luxury.

HOW IT HAPPENED: Envious of some of the streamlined trains with observation cars that were growing in popularity – including the Skytop Lounge, which debuted on the Milwaukee Road line in 1948 – CPR decided to upgrade its cross-country ride, introducing elevated transcontinental service between Montreal / Toronto and Vancouver. The sleek new Canadian cars featured sleeper cars, glass domes, and wall murals in the domes painted by prominent Canadian artists.

WHY IT MATTERS: The Canadian became the blueprint for long distance, overnight train travel in Canada. This classic route is still running, now operated by VIA Rail, and has become an aspirational journey for Canadians, Americans, and other rail lovers wishing to travel through history by crossing the country by train.

Lisa Kadane
Lisa Kadane is a travel journalist based in Kelowna, BC.
Share

Film Locations to Visit Across Canada

Best Things to do in Vancouver

8 Facts About Polar Bears in Canada